Sandra Cvetanovic: The life of a tennis playing student-athlete

Sandra Cvetanovic is another former Kinetik Tennis Academy student who went to the USA to study and play tennis. In the three years that she’s been at Michigan Technological University, she’s had some incredible experiences – and played some terrific tennis!

We’ll let Sandra tell you all about what it takes to be a tennis playing student-athlete, but not before we add how impressed we are with her dedication and passion. Keep it up, Sandra!

I’m Sandra, and I am a former player at Kinetic Tennis Academy. During my time there, I was primarily coached by Philip Lawson, and Jean and Rensia De Lange. I am currently finishing my third year as a college athlete at Michigan Technological University.

My first time coming to Tech, I had no idea what was in store for me. College is very different from high school – there is no one to look out for you but yourself, workload increases, and as a student-athlete, sport consumes you completely. I learnt this very quickly. As soon as I came into college, I jumped right into the season. Two weeks before school started, we trained for four hours every day, and then when college started, we trained two hours every day, along with conditioning (lifting and fitness) two or three times a week for an hour at 6 am.

Being in-season meant missing every Friday lecture, and sometimes Thursday lectures as well. This was due to the unique location of our school, at the leftmost corner of Michigan’s Upper Peninsula. Our closest school is six hours away—most schools are nine hours away. And the Ohio schools are 14 hours away… Consequently, we missed a lot more school than the other teams in our conference (GLIAC), due to travel time. And as an Engineering student, this fell hard on me as I missed most of my labs and had to reschedule them. But it also meant that I got to travel around the state, bond with my teammates, and see other schools and meet people from many backgrounds.

The structure of the tennis team is as follows: six girls in the line-up for singles and six girls in the line-up for doubles. As our team only had six girls my freshman year, we all played. As a team, we didn’t do so well our first year owing to two serious injuries and no players to step in for our injured players. Individually, however, my doubles partner, Kwang Suthijindawong (Thailand), and I won our regional ITA tournament and went on to play in the national NCAA tournament. We came out ranked 10th in the country out of all doubles teams in DII – this was an achievement that I will cherish forever. Missing two weeks of school had never been so worth it! Additionally, I was named to the All-GLIAC Second Team, which as a freshman playing at number 2 was something to be proud of! 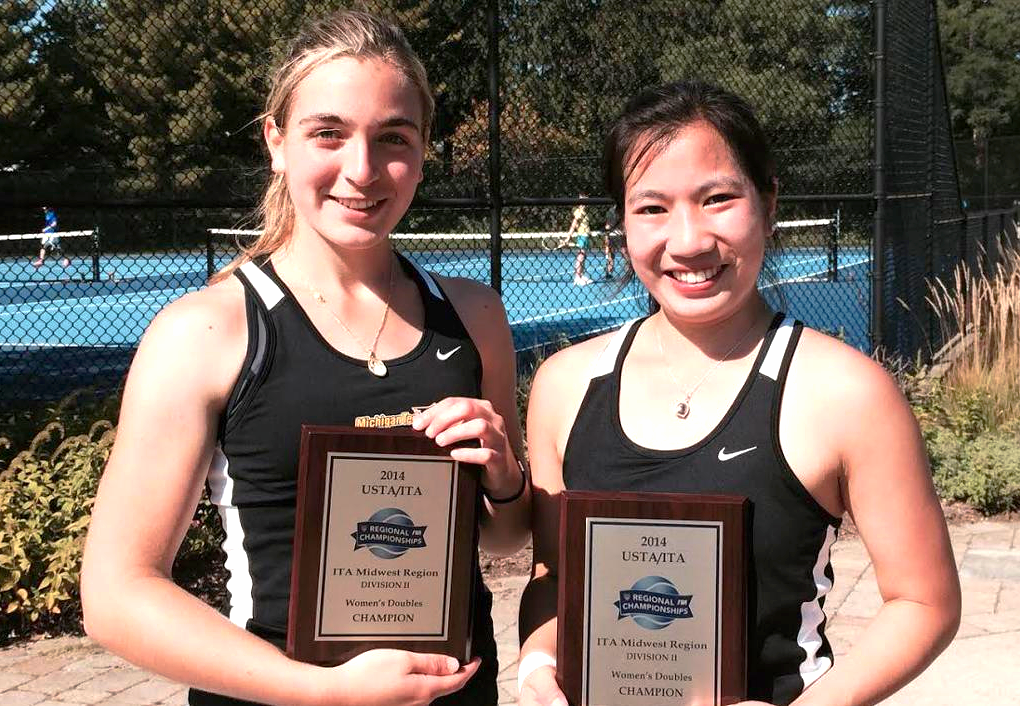 Once season had ended, school suddenly became a priority again. After all the classes and labs I had missed, I had a lot of rescheduling and making up to do. This was tough, but being in-season had taught me the importance of good time management, and I survived without too much trouble. The best thing about being off-season was having time to get to know all my classmates, whom I had barely seen during in-season. I made a lot of non-tennis friends during this time and had more time to get to know my tennis girls as well. Off-season was the time to stay on top of my workload but still have time to get to know my school and life outside of school. Training still continued, of course, but less than before.

Being out of season gave me the opportunity to travel – my first off-season, I got to visit Chicago, Minneapolis, and Duluth. I also got to explore the area around my school. If there is anything anyone needs to know about Michigan Tech, it’s just how beautiful the location is. In the fall and summer, it is paradise for anyone who enjoys biking, canoeing, rafting, hiking, cliff diving, etc. It is full of waterfalls, forests, cliffs, lakes, and mountains. By the time my season ended, however, we were already seeing snow. And being the snowiest college in the U.S., we saw snow from November right through to May. Winter, however, is what brings our town to life. During these cold months, I got to snowboard frequently, go snowshoeing, explore frozen waterfalls and caves, walk across a frozen river, and enjoy Winter Carnival. Carnival is a unique event in which we have a week off of school to enjoy the snow: several student groups build huge statues completely made of ice and winter foods and drinks are served all across campus throughout the week. All winter activities are half-off and we have events such as sledging (so fun!), mushing, and sled-racing.

Around March, the NCAA tennis teams across the U.S. also compete in a Spring Break Tennis Fest. Our team went down to Hilton Head Island in South Carolina, where we had a week-long of tough matches against teams from all over the country – and we also had a lot of fun going to the beach, and enjoying bonfires and hot tubs. Spring break was a blast and has always been. It is a time to enjoy tennis without worrying too much about school.

Now that I am almost done with my third year, I can confidently say that being on the tennis team has been one of the best experiences of my life. My tennis has improved, I’ve had the pleasure to enjoy seasons where our team has been very strong, and I’ve come to view tennis as a lifestyle as opposed to just a sport. Although it has kept me busy, alongside work and school, I have made lifelong friends and got to experience many different cultures. In my team alone, we have had Thailand, Germany, Brazil, South Africa, Mexico, Colombia, USA, Kyrgyzstan, Macedonia, Canada, Ukraine, and Venezuela. I’ve actually had friends over in South Africa, and I have two trips planned to Brazil and Thailand – I cannot wait! But being in the U.S. also means that I have a lot of opportunities to travel this large and diverse country as well! I will be going to Florida, Seattle WA, Colorado and Rhode Island this summer to visit friends, but other places on my bucket list include: Yellowstone National Park, the Grand Canyon, New York, Boston, Hollywood, Las Vegas, and San Francisco, to name a few!

Being a student-athlete takes commitment. It takes a very large chunk of your time, wears you out, and forces you to sacrifice many things that you could be doing instead, such as homework, sleeping, going out with friends… And it is absolutely worth it. Being a student-athlete doesn’t deprive you of the college life; it just adds on to it and makes it better! I have gotten to experience life as both a normal student and a student-athlete, and there has been no greater satisfaction than this!